Prime Minister Narendra Modi met a 17-member Kashmiri Pandit delegation from the Global Kashmiri Pandit Diaspora (GKPD) in Houston today and assured them his government was committed to “building a new Kashmir for everyone”. The delegation, which included Pandits from across the United States and was told “Kashmir mein nayee hawa bah rahee hai (New winds are blowing in Kashmir)”, offered its “unequivocal support” to PM Modi over the centre’s decision to withdraw special status to Jammu and Kashmir under Article 370.

PM Modi, who landed in Houston on Saturday to attend ‘Howdy, Modi!‘, an event organised by the Texas India Forum, is in the US for a week-long visit that includes a roundtable with CEOs of energy giants, a bilateral meeting with President Trump and a speech in front of the United Nations General Assembly.

I had a special interaction with Kashmiri Pandits in Houston. 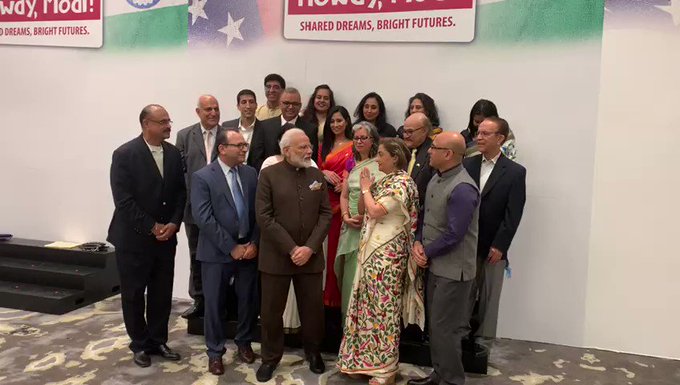 15K people are talking about this

“I had a special interaction with Kashmiri Pandits in Houston,” PM Modi tweeted, after MEA spokesperson Raveesh Kumar earlier tweeted: “In Houston, a delegation of the Kashmiri Pandit community met the Prime Minister. They unequivocally supported the steps being taken for the progress of India and empowerment of every Indian”.

Last month the government ended special status granted to Jammu and Kashmir under Article 370 and bifurcated the state into two union territories. The decision was followed by a stringent security lockdown that included the snapping of internet services and the house arrest of political leaders, including former Chief Ministers Mehbooba Mufti and Omar Abdullah.

The decision prompted furious criticism from political activists and the opposition. It was also flagged by the UN Human Rights Council, which said it was “deeply concerned about the impact of recent actions by the Government of India on human rights of Kashmiris”.

It was, however, welcomed by the GKPD, which said the decision had put a “lasting seal on the sovereignty” of the country. In a statement issued after the decision, the GKPD said, “We want a separate settlement in the Valley where all Kashmiri Pandits, who borne the brunt of forced exodus, can live together”.

“Modiji brought smiles to the faces of our delegation by promising a new Kashmir that we will build together, for everyone,” Rajiv Pandit, a member of the delegation, said.

Other members praised PM Modi and said his “assurance” had given them renewed hope.

The Prime Minister also met a delegation from the Dawoodi Bohra community, whom he praised as having “distinguished itself across the world”.

With input from PTI, IANS